Here at Vergette we put a great deal of thought into our planting plans. We consider, in detail, plant associations which will work well together. We look at the foliage, growth habit and soil requirements. We also consider flowering times and how the flowers of different plants will work with each other.

Do we want a harmonious feel to our scheme or one of contrasts?

We may use a combination of biennials and annuals to give a scheme a feeling of fullness as we wait for the perennials to mature. 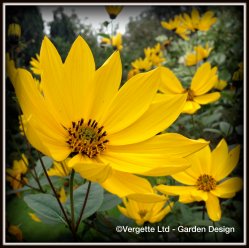 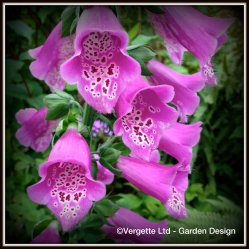 In short my Lovelies we take great care in our choices for our clients.

However as actors say ‘never work with children and animals’, perhaps we should say ‘never tell Mother Nature your plans’ as sometimes she most definitely has other ideas.

The following is (I hope) a one time only plant combination.

Nestled in the side of the Malvern Hills is a stonkingly fine nursery and yet, up until last week, a place I’d never been. Purveyors of Michaelmas Daisies and holders of Plant Heritage National Collection of Autumn Flowering Asters- Old Court Nurseries have always been a must visit at the Malvern Autumn Show. However I have a new planting scheme for a client and was after a more delicate and airy aster than they had a the show, so that called for a nursery reccie.

Now I may be the only Garden Designer in the family, but I’m not the only plant nut, so I asked my Mum if she fancied an aster reccie too (she did), so off we went on a jolly (or if the accountant’s reading this “an extensive fact finding tour”)

There are a couple of things you should know about my mother she has a wicked sense of humour, a healthy disregard for authority and she’s also a wheelchair abuser (she thrashes hers to within an inch of it’s life).

One of the first plants we came across rather fitted the bill for “delicate and airy”, not an Aster, but determined to make it’s acquaintance I hot footed it back to the entrance for an introduction. Althaea cannabena was the name of this delicate beauty, I’m sure Mum deliberately misunderheard, continually referring to it as “that cannabis plant”. Although on further investigation she’s wasn’t far wrong, one of its common names is Hemp Leaved Hollyhock.

As we carried on through the garden some of the more lax plants lining the path were in danger of falling under the wheels of the chair, necessitating a bit of plant wrestling. Obviously during such a bout what you really want is one of the nursery owners to come around the corner accompanied by Carol Klein.

“Dont mind us”, pipes up my mother, “I’m just pruning some of the plants”.

To which Carol Klein replies “oh you need to get some blades on your wheels a bit like Boudica”. I may have rolled my eyes at this point, as my mother needs absolutely no encouragement to be any more Boudicean in attitude.

There are hundreds of different varieties of Michaelmas Daisies in the beds and borders around The Picton Garden, some are planted predominantly with asters. Whyle others have a more evenly mixed planting scheme with other late flowering perennials and shrubs. So if you want a bit of inspiration for an autumn scheme then this is definitely a good place to start.

The Glade, Centenary, Black and White and Sliver Gardens however were destined to remain a mystery as some of the paths were rather narrow and the wheel chair battery had a sudden fit of the vapors. Sadly I’m not as skillful as my mother in negotiating obstacles, so we decided rather than plough through the gardens we would go back and look at the stock beds.

It was all going quite well, me pushing the chair, stopping every now and then so we could both take a closer look at various plants. Then, having encountered a thick layer of gravel we rather ground to halt. The ensuing struggle led to perhaps the odd accusation of brakes being applied and rather a lot of giggles. We were still mirthful and perhaps a little too vocal as we made it to firmer ground, only to be asked by a youngish chap if we could please be quiet as they were filming. At this point the penny dropped, yep we had stumbled, rather noisily, into a Gardeners World segment being filmed.

So we waited quietly for them to finish. We watched as again and again Carol walked round the corner of the garden and said “Wow” at different points depending where the camera was. We watched as she languorously stroked the petals of the daisies as she walked past. Poor things must have been quite relieved when they’d got the shot.

It became evident that the GW team were, as Captain Oats may have once put it, going to be some time, so we abandoned any thoughts of seeing the beds. Which was a shame, as even from a distance they looked great. So to make up for this disappointment we made our way to the sales area and contented ourselves there.