Although I went to Chelsea last year I didn’t blog about it – for lots of reasons, but mainly because I didn’t get there until later in the week by which time a plethora of excellently written blogs had pretty much said all there was to say.

This year there are probably even more excellently written blogs, because you see this year in particular Chelsea 2015 seems to be, to quote Bill and Ted, most excellent.

I’m not going to wax lyrical about the various stylistic merits of any gardens or make a critique of every garden, instead I thought I would make a note of those little details that caught either my eye, my heart or stirred my imagination.

To start with you can’t beat the Artisan Gardens for their attention to the minutiae, well I suppose you have to given their size. I loved the forge on The Motor Neurone Disease Association Garden, it seems hard to imagine a few weeks ago it was a pile of bricks on a pallet until Twigs Gardens got their hands on them.

However my absolute favorite garden in this category was The Evaders Garden by Chorley Council, designed by the uber talented John Everiss.

I loved the transition in the planting either on side of the parachute path and the way the sun lit the stained glass. However it was the sculpture along side the beautifully built wall that gave this garden such emotion.

The Sentebale – Hope in Vulnerability garden designed by Matt Keightley, was another garden to stir the soul. It’s hard to imagine that a garden so full of orange could be so restful but in the early morning light the garden glowed softly.

This was another garden that stirred the emotions with the children’s footprints on the path, simple, effective and quietly beautiful.

Moving on from gardens with amazing paths to gardens with gorgeous water. Water is a difficult one at Chelsea, the Plane tree mast not only chokes the visitor but also settles on any surface seemingly especially drawn to water features. This is not such an issue for a naturalistic swimming pond but an absolute nightmare for the sleek reflective water features in both The World Vision Garden and Breakthrough Breast Cancer Garden.

However due to amazing diligence with shrimping nets and filters neither of these gardens had dusty water to detract from the mirror like qualities of their garden pools. They also relied on perfect levels so hats off to their contractors

A couple of the walls caught me eye for separate reasons I loved the Mondrian like wall in The Telegraph garden, I couldn’t capture the details well but each piece had been beautifully crafted with shading and motif.

In stark contrast to the precision of The Telegraph Garden the sinuous curves of the Pure Land Foundation garden were so sculptural they added much to this small space. Again hats off to the contractors for making the designs such a fabulous reality.

Its hard to say which garden was my favorite because they all had something different to offer but my absolute favorite thing about Chelsea is, and probably always will be……….the plants………. both inside and out.

Firstly as a gardener I live with the certain knowledge that the beasties in the garden, be they marauding molluscs or evil weevils are all after my plants. Secondly I also know that these are discerning creatures often dining out on your most valuable plants, not just those that are expensive but those that are rare or irreplaceable for sentimental reasons.

So it was with some dismay when revisiting a garden this week that this sight befell us….

It was with a sinking heart I went in for a closer inspection, for there, as expected in glorious technicolour was the culprit

These beetles have strict dietary requirements namely the Liliaceae lovingly planted by you or I and in the case of this week’s sighting they seem inordinately fond of Martagon Lillies.

The adults are very bright and fairly easy to spot, however, not relying solely on their bright red colouring to act as a warning to predators they have a cunning survival trick up their sleeves. If you attempt to pick them off the Lilly they cast themselves to the ground and land on their backs, as their underside is black it makes spotting them nigh on impossible. So a little trick is to place a sheet of newspaper beneath the plant as it makes collecting up and dispatching the beetles much easier.

Next turn all the leaves over to remove the eggs, because if you’ve got the adults at this time of year the chances are high you’ll also have their eggs.

The eggs are this orangey colour however as they age they become darker. They are quite easy to remove by gently rubbing off the surface of the leaf, and then rubbing finger and thumb together.

Now for those of you wondering if I have landed a staring role in “Smurf – The Musical” the reason for the latex gloves is not because the eggs are likely to cause a reaction, they were just in case I came across any Larvae. To reduce the chances of predation at the laval stage these beetle larva have come up with an ingenious and completely repulsive way of protecting themselves, they camouflage themselves in their own excrement – and yes I am pulling a face as I type that**.

Its a mucky job picking them off, hence the gloves. Now if you don’t want to spend your day grooming your lillies like a monkey bonding with its troupe, I find it rather satisfying in a “take that you _______”(insert own expletive here) sort of a way. However I do understand this control method isn’t for everybody so I suggest you have a look on the RHS website for a list of controls.

The RHS are also asking anybody with these particular garden nasties to help with a survey – should you feel so inclined.

**happily for all concerned no excrement covered larvae were discovered

Perspectives of Malvern – The Photographer, Visitor and Exhibiter’s views and what I learnt from them all.

This year I went to Malvern Spring Show three times and each time I came away with a different impression, if you like a different perspective. Now I hadn’t planned on visiting in triplicate but have you ever noticed all the best parties occur in an impromptu fashion.

I’ve been involved in one way or another with the gardens at Malvern for quite a while now, whether its my own show piece or helping other designers with theirs. Malvern is a tricky show to build at mainly because of the weather. With the Hills channeling everything Mother Nature can muster in your general direction you can experience all the weather in one day. It’s not unusual to get frost, hail, torrential rain and sunstroke all in a day during build up, but worst perhaps can be the almost gale force winds that swirl around the show ground. This is bad enough for the designers and contractors but the poor cosseted plants find it most objectionable.

For the first time in a long time I wasn’t working on a garden this year which I found made me much more objective as a designer when looking at them. I didn’t know the back story to the build and had no idea of the trials and tribulations the designers and contractors had gone through to produce their gardens. In short I was just like any other visitor looking at their gardens.

Another first for me was looking at the gardens with a professional photographer, Jonathan Ward. Particularly daunting as I have a new camera with not a clue how to use the bloomin’ thing, and yes ladies and gents I did leave the lens cap on and wonder why I couldn’t get a shot at one point. I became much more aware of looking for the best angle or as Jonathan, like a patient parent pointed out, perhaps I should look for ‘The Shot’. It was pointed out which gardens made for the best picture and to be be aware of what was in the background.

I was particularly pleased with this shot as there was large blue lorry and a rather bright flag on the other side of the hedging which you can’t see in this pic.

The problem was I’d become so focused on hiding them I forgot to look at the composition of the picture. So no the wildlife friendly bench isn’t floating on the water feature.

I don’t think I shall be giving up the day job anytime soon, but it was fun.

The next day I met up with three lovely ladies with whom I’ve chatted on twitter. We took in the show gardens and the floral marquee and generally had a pretty good time.

I discovered Alison likes Lupins and also seemed particularly taken with the Violas on the Wildegoose Nursery stand – well they did get a Gold Medal.

and Helen liked the troughs of alpines.

but keenest of all was Kitty, who’s delight at the Ariculas made me take a more appreciative look at these tiny plants.

Pelargoniums also featured in our day both on the show ground and the floral marquee but most delightfully of all, in cake form courtesy of the rather fabulous Fibrex Nurseries.

We also tried eating oxe-eye daisies and pine shoots for the first and as for pine shoots possibly the last time. If I’m honest the pine was an experience, very astringent and a bit much on its own but it has made me think I may have more edible plants in the garden than I first realised. So thank you to Liz Knight of Forage Fine Foods and Marc Diancono of Otter Farm for enlightening me.

So onto day three, where it was Malvern from the other side so to speak, where I got to experience the show from the perspective of all those who have trade stands and exhibits in the floral marquee.

Firstly with Colin and Tina of Plant Supports UK. Now I’ve bought supports from them for myself and for clients in the past but never sold them. 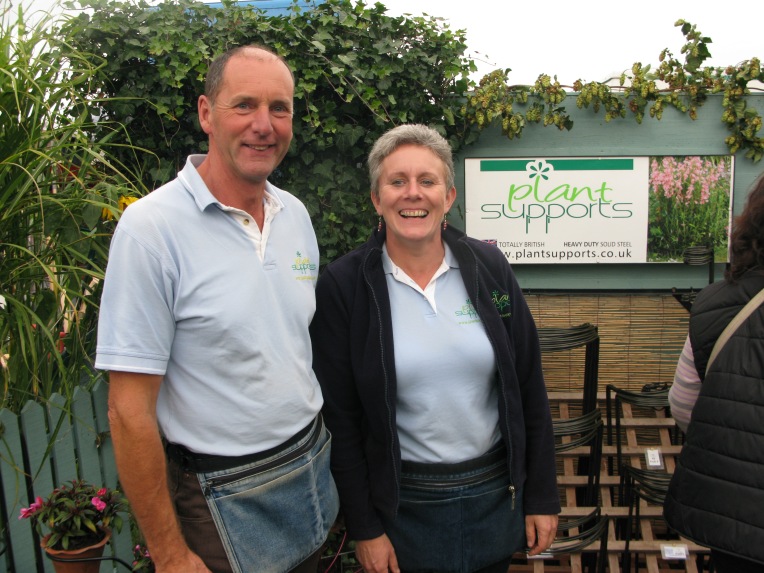 Also a couple of days before the show I saw a tweet from Sue Beesley of Bluebell Cottage Nurseries asking if anybody could help on her stand. I figured having been at the show for two days I may as well go for three and as Sue is delightful and a bloomin’ good grower helping sell her plants should be fun.

Again I learnt a lot, this time that as an exhibitor the ankle nipping trollies other visitors dislike are in fact the traders best friend, those people with trollies don’t need a plastic bag for their purchases, excellent news for the environment and the traders. I learnt that Tina is so cheerful it’s infectious, I’m not sure I’ve laughed so much in a long time. I also learnt how to use a card reader *sort of* and discovered that selling anything from solid steel supports to solidly grown plants is easy because they pretty much sell themselves.

But lastly and possibly most importantly I learnt never ever give a plant a pet name because as soon as you do you have to take it home.

May I introduce you to Shrek, he’s a little bit special and came from Bluebell Nurseries. Thank you Sue.