Sometimes it’s hard to keep your work life balance so when a friend, whom I haven’t seen for some considerable time, suggested a day out it seemed like a very good idea. When she went on to suggest a trip to Cottesbrooke it seemed even better.

For those that don’t know, Cottesbrooke Gardeners’ Fair is held in the grounds of Cottesbrooke Hall in Northamptonshire. I first heard about the fair two years ago, although it is in fact celebrating it’s 5th anniversary this year. Last year there was much talk of horrendous traffic queues along narrow twisty lanes, so much so, that it was agreed that we would meet up at stupid o’clock on Saturday morning and not worry to much about what time we would arrive. In the event the roads were clear and we arrived stupidly early.

First stop was the Know How Tent, to check out who was talking about what. We decided on the second talk of the day by Mark Diacono. This decision was in no way influenced by the lure of free cocktails.

Having booked the talk we had an hour free to do a spot of shopping, starting at the nearest exhibitor which by coincidence was The Otter Farm Stall. Szechuan pepper purchased and banter exchanged* it was time for the traditional day out bacon butty brekky.

Marc Diacono’s talk was funny, interesting and ultimately challenging. Asking people to look at how and what they grow in their veg patch. Will I go on to grow two vegetables I hate next year, probably not. However I am most definitely looking at perennial veg in a new way and I have ordered some Egyptian Walking onions.

There are plenty of artisans displaying their crafts from wood to willow and steel to stone. 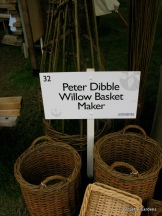 The plus point of this fair is you can break up the shopping by having a meander around the gardens. I did’t want to turn this day out into work so I had done absolutely no research into the house or its gardens. Each area is different but all work and create a pleasant contrast. Lots of lovely plant combinations and some great ideas for you to try at home.

Much has been made of the variety and choice to be found at this fair. We were a little disappointed as many of the stalls seemed to be offering near identical plants. This may be a result of the poor season we have had so far, resulting in nurseries buying in stock. However where this fair excels, is the relatively small number of independent specialist nurseries who who offer a real choice of unusual plants, unavailable at garden centers. SWINES MEADOW NURSERY offer a collection of some super unusuals. DYSONS NURSERY were selling Salvias to make you salivate.  MEADOWGATE NURSERY specialise in gorgeous grasses but D’ARCY AND EVEREST shouldn’t be confused with MR D’ARCY’S heritage fruit trees, otherwise you may get an apple when you were expecting an alpine!

Whether you were purchasing the unusual or a more familiar plant, it seemed nearly every stall offered healthy and vigorous plants, no weedy end of display specimens here!

So buy, buy, buy. Bye-bye Cottesbrooke ’til next time

*according to Mr Diacono all plants should be named, so I have called my new Szechuan pepper “Justine Thyme”